skip to main | skip to sidebar

More of Kaye's Artworks at www.kayejohnston.net 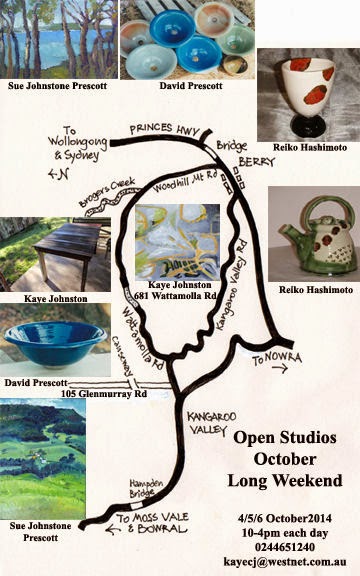 Posted by Kaye C Johnston at 7:10 PM No comments:

fibreglass over timber armature
exhibited at Kangaroo Valley Arts Festival Sold
Posted by Kaye C Johnston at 12:43 AM No comments:


I have been developing biological-like sculptures based on research into plants
Posted by Kaye C Johnston at 12:31 AM No comments:


Red Plaques
Posted by Kaye C Johnston at 12:30 AM No comments: 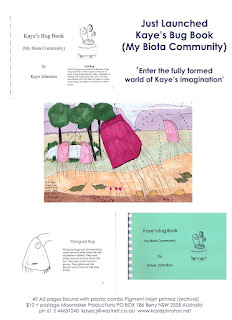 
Very limited edition.
Posted by Kaye C Johnston at 12:30 AM No comments:

It seems that clothes for women with animal references are fashionable again. I have seen materials with leopard and ocelot spots, various animal stripes (Zebra) and reptile patterns (stretched snake or lizard skin patterns). Are these our Jungle clothes, for the ‘Woman on the Prowl’ as Good Weekend Mag says? (March 2011) My hairdresser informed me that “On the catwalk this autumn (in Hong Kong) 80s
fashions are back in.” She told me that 80’s hairdos have lots of soft curls, she didn’t mention animal prints. Another magazine told me that women have to release the animal within on another page tame the animal within. I was also told I could go on safari wearing animal print clothes!

Spots and stripes are common but why not insect patterns? Lady Bird spots, red on black is very sexy. Not just in clothing for children or children’s furniture. What about Bronze Orange Bug, they are very colourful (also toxic)? What about cockroaches? They are also very sexy with their black segmented armour-like body parts. There could be very sheer fabric sewn between the plates for cooling purposes.

Why not consider using ideas from spiders? Their hairy appendages could be used in appealing animal–like patterns. Imagine a large floor covering with the spider’s hairy legs used as the pattern and a naked female lying on it. Prowling! Or jumping spiders with their luminescent colours and many shiny bright eyes, they would make lovely coloured patterned designs for clothing.

How about marsupial-influenced clothes with pouches and long tails attached to clothing? The pouches would be very useful for shopping and errands. I had a friend in England (when we were young Ozzies doing our motherland tour) who used to tell the Poms that we all had pet kangaroos back home in Australia to do the shopping for us. She’d say “we put a note and some money in their pouch and send them off to the
shops”. A large pouch built into our modern clothes would be very useful. The pouch could be attached across the breast area and human young could be carried in the pouch and be able to access its milk supply whilst the mother is on the prowl. Just like marsupials!

Foot and claw prints (from dinosaurs) on clothing would be good, or teeth prints fromvarious animals. Shark mouths with pink and white colouring, with a little bit of red could work. Snake mouths with the bifurcated tongue and the blue tongues of Blue Tongue lizards would be interesting. Or horse’s mouths with green grass between the teeth would surely bring out the animal from within. How about a lion’s mane across the chest area of a summer frock?

It was an International Women’s Day function at the local museum. There was the usual mix of women from a small community. There were old ladies who helped out at the museum, women from the CWA, View club and Zonta, all women’s service organisations. And there were women from the Women’s Refuge, the Women’s Health Centre and women’s education courses at TAFE. There were middle class women and the others. There were women dressed up and others who dressed down. There were heterosexual women and lesbians, a cross section of the community. And there were two women on the prowl. They weren’t young but they had their jungle clothes on.

One of the women wore spots and the other wore animal–like patches (perhaps giraffe) and lots of gold jewellery. The gold jewellery seemed like a contradiction. How can a woman, when on the prowl be animal-like when adorned with bright minerals? Imagine soldiers in camouflage gear and gold. They would be soon picked off by the enemy. Imagine women on the prowl with their animal print clothing and heavy gold jewellery crawling through waist high grasses.

I also wondered at the purpose of being on the prowl at an IWD function! There were very few men present (or none) so were they on the prowl for women?

What is ‘On the Prowl’? What do women do ‘On the Prowl’? Is it part of our biological destiny, instinct, urge to capture a mate and perform a mating ritual? So currently (and it obviously changes in the minds of designers in different seasons) these prowling behaviours need animal-like (other than human) references to be successful. Am I missing something, is it really about men being attracted to animals? So it is the print he is attracted to not the person underneath the clothes!

Personally, I need clothes for a woman who lives in the 21st century, not in caves or in prehistoric times. I don’t want to be knocked on the head by an animal-bone club by some Freddy Flintstone. And I want clothes that are made from natural organic fibres that breathe in hot climates and that are comfortable to wear. I want to be loved and communicated to through my brain not my ‘animal within’. I want my jungle to consist of books and politically aware, caring, people who are interested in ideas and how to change the world, not what chemical you put on your body. And, I don’t want to be manipulated by an advertising company on behalf of some other commercial interest about what the correct thing is to wear!

The women ‘on the prowl’ were exposing their ‘animal within’ with a little touch of glitter and bling. Were they on the lookout for tall, dark, handsome and loaded?  But there were no men. It was International Women’s Day and all the men were at home working; washing, cleaning, dusting and bending over double putting the rubbish out. It was a lost cause. They must be confused, they had come to the wrong jungle.

Posted by Kaye C Johnston at 4:51 PM No comments: 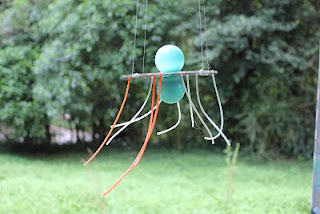 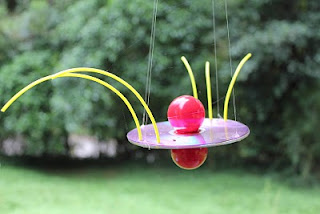 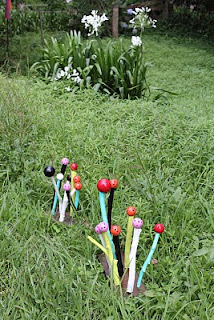 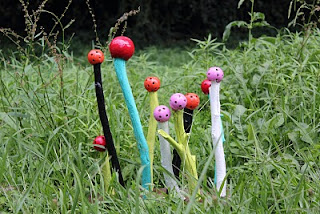 Posted by Kaye C Johnston at 11:26 PM No comments: 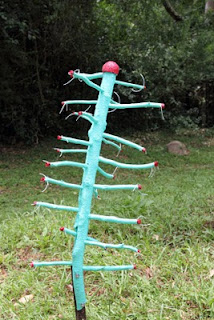 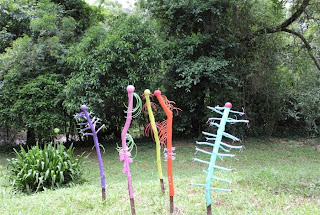 I have been developing biological-like sculptures based on research into plants, seeds, fungi, fish, microscopic plankton, viruses and bacteria. They are constructed from found sticks and pruned wood, plastic lawn trimmer cord, glue and oil paint. I use traditional mortise and tenon joinery method. 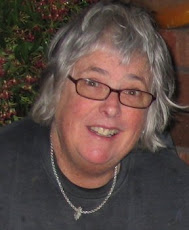 Kaye C Johnston
Kangaroo Valley, NSW, Australia
I am an artist, writer and have played in the Berry Silver Band since 1992. I play cornet, flugelhorn and I also play trumpet in the Shoalhaven City Concert Band which I love. 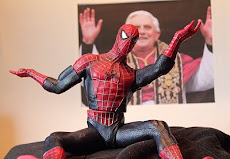 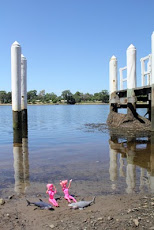 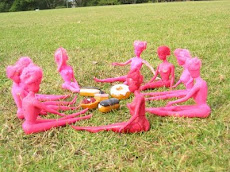 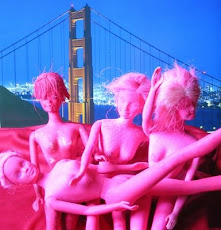 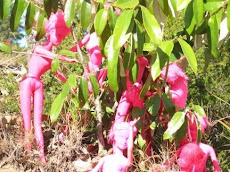 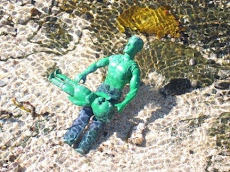 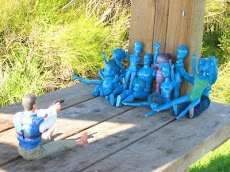 Shot Because They Were The Wrong Colour 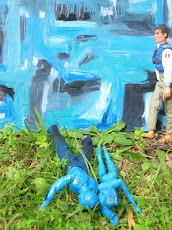 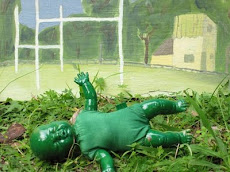 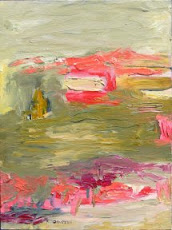 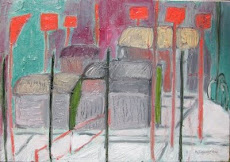 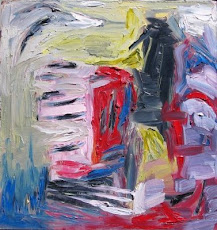